I just came back from Maine; it was great. My daughter, Emily, got married to a great guy, Daniel.
Here's a picture from the wedding reception under the tent. 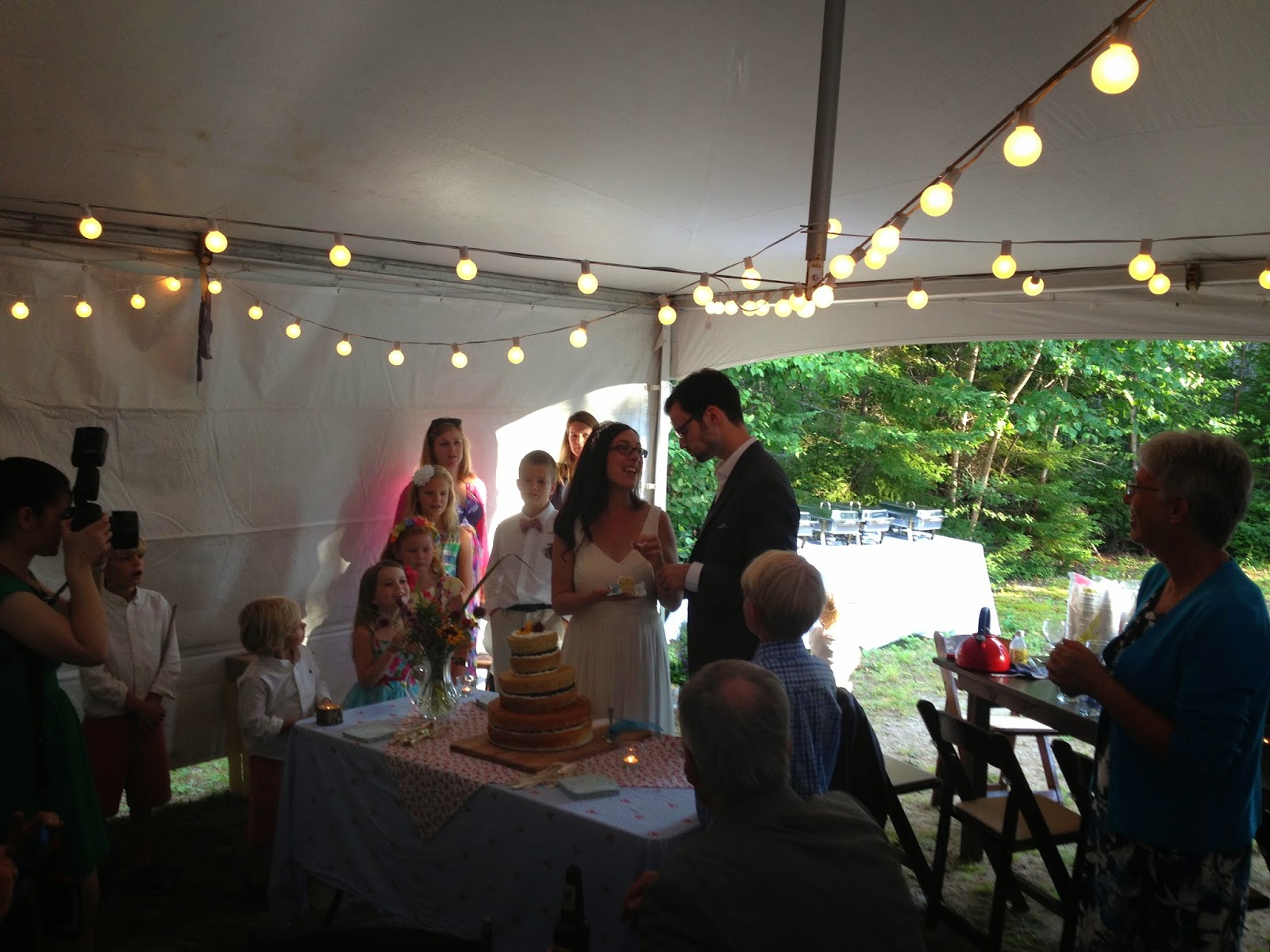 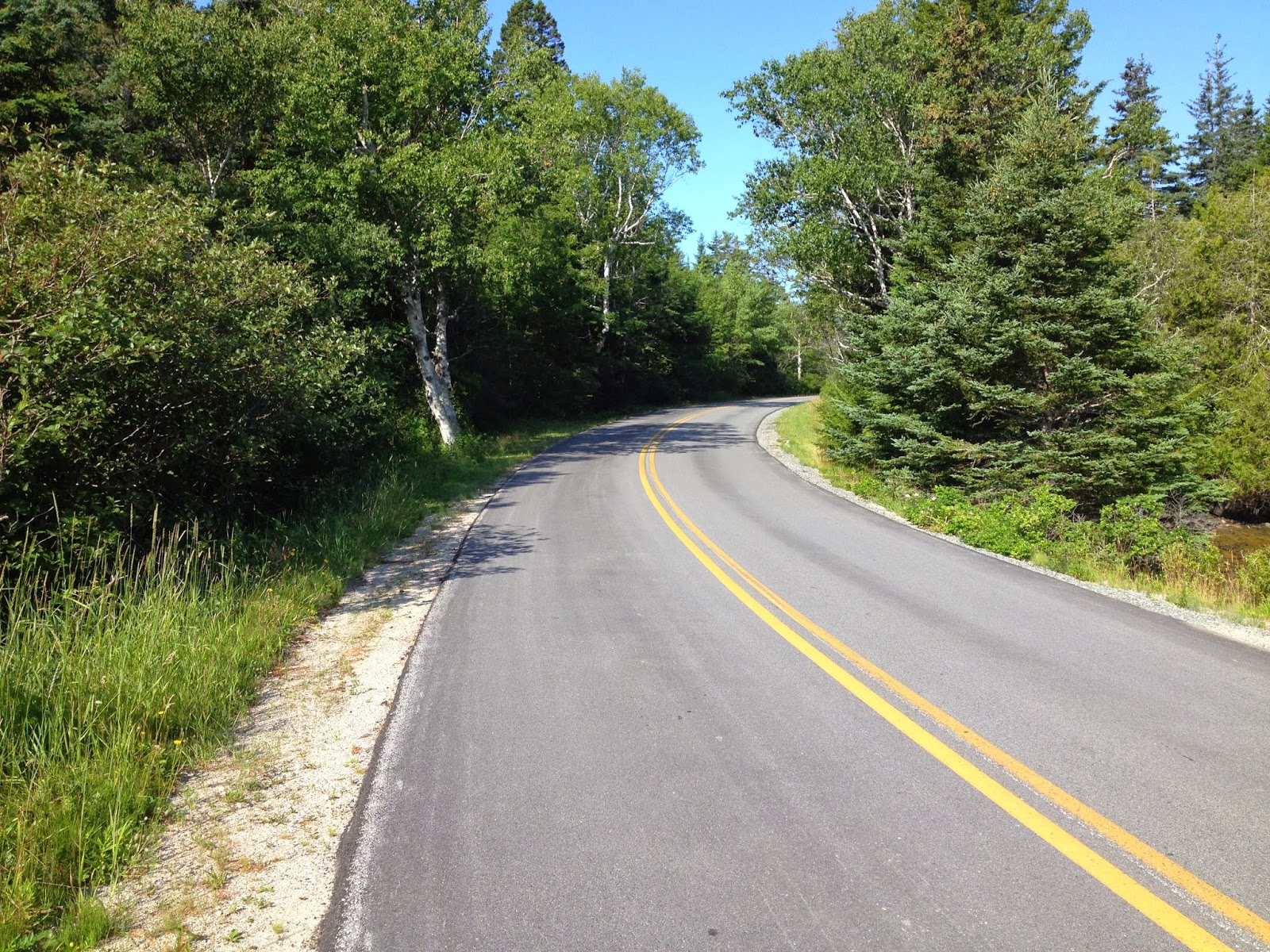 The wedding was gorgeous, the two families partied together and enjoyed the rugged scenery of Maine. And, as a bonus I got to do some training there and race in Joan Benoit Samuelson's Beach to Beacon (B2B) 10K.
There were dirt roads around the area where we were staying but my favorite was to drive to the Schoodic Peninsula part of Acadia National Park and run on the one way drive through the park. The view ahead is shown to the left; the view to the side below. Maine, you've got scenery to spare! 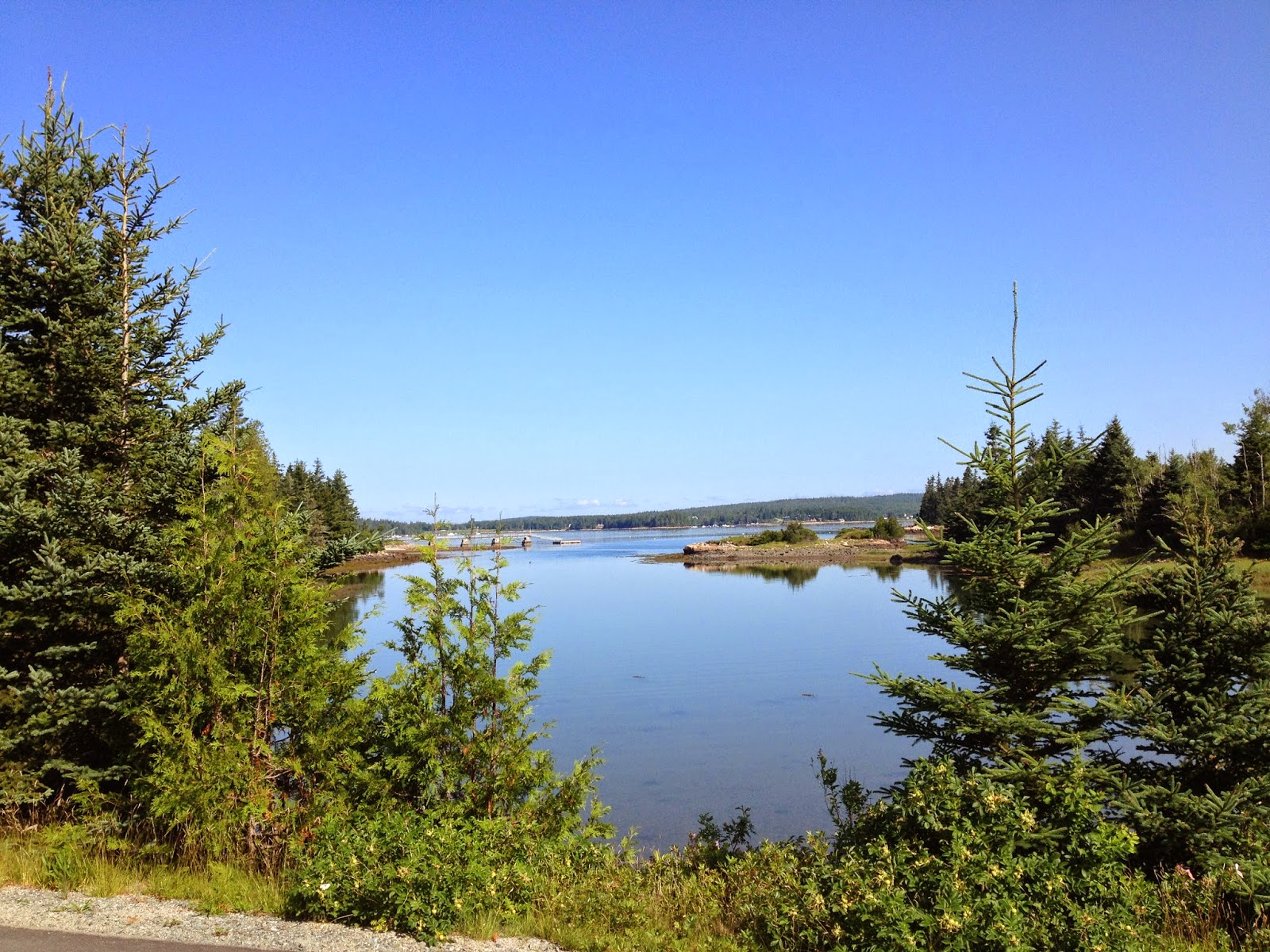 For a road runner, this workout site was great--a very smooth, paved road to run on, very few cars (on a weekday morning), one-way so you can run in the middle of one of the lanes, hills for variety, not to mention the views. The hills were mostly rolling but a couple were more challenging. Hills are great-you do get tired of course, but they wake up your legs and prevent you from falling into a too comfortable pace. And they build your speed and general toughness as a racer.

After the wedding we were in the Portland area--Great lighthouses and parks. 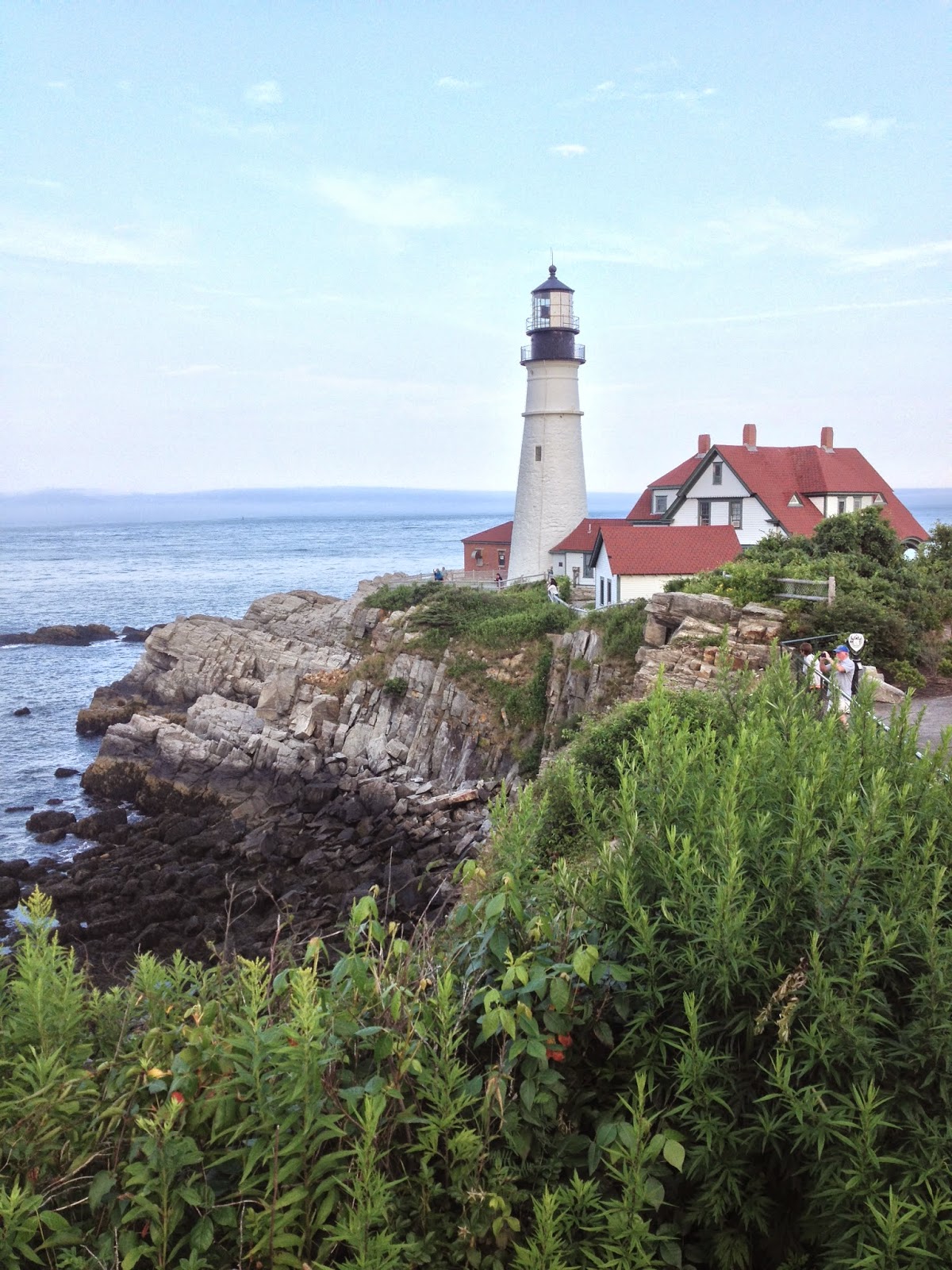 This is the lighthouse, or beacon, at the end of the B2B Run in Fort Williams Park. (On the day of the race they had a huge likeness of Joan Benoit Samuelson on the beacon itself-pretty amazing-in honor of the 30th anniversary of her Olympic gold medal Marathon win). The race starts near Crescent Beach State Park in Cape Elizabeth, Maine and winds northward along residential streets with an occasional glimpse of the ocean. The Race prides itself on attracting elite runners and they often have the fastest 10K time in the world at least up through the beginning of August. That is a real tribute to the pulling power of the race and Joan Benoit Samuelson's involvement, as the course itself is not easy. The first couple of miles is deceiving as it is pretty much flat or downhill but you get your first serious hill right before the 3 mile mark and then again you have a pretty fast stretch through miles 3 and 4 but then over the last mile there is a series of hills that are pretty challenging. If you run this race make sure you don't go out too fast-you need something in the tank to surge through the downhill portion at the beginning of mile 4 and then be able to attack the hills at the end. 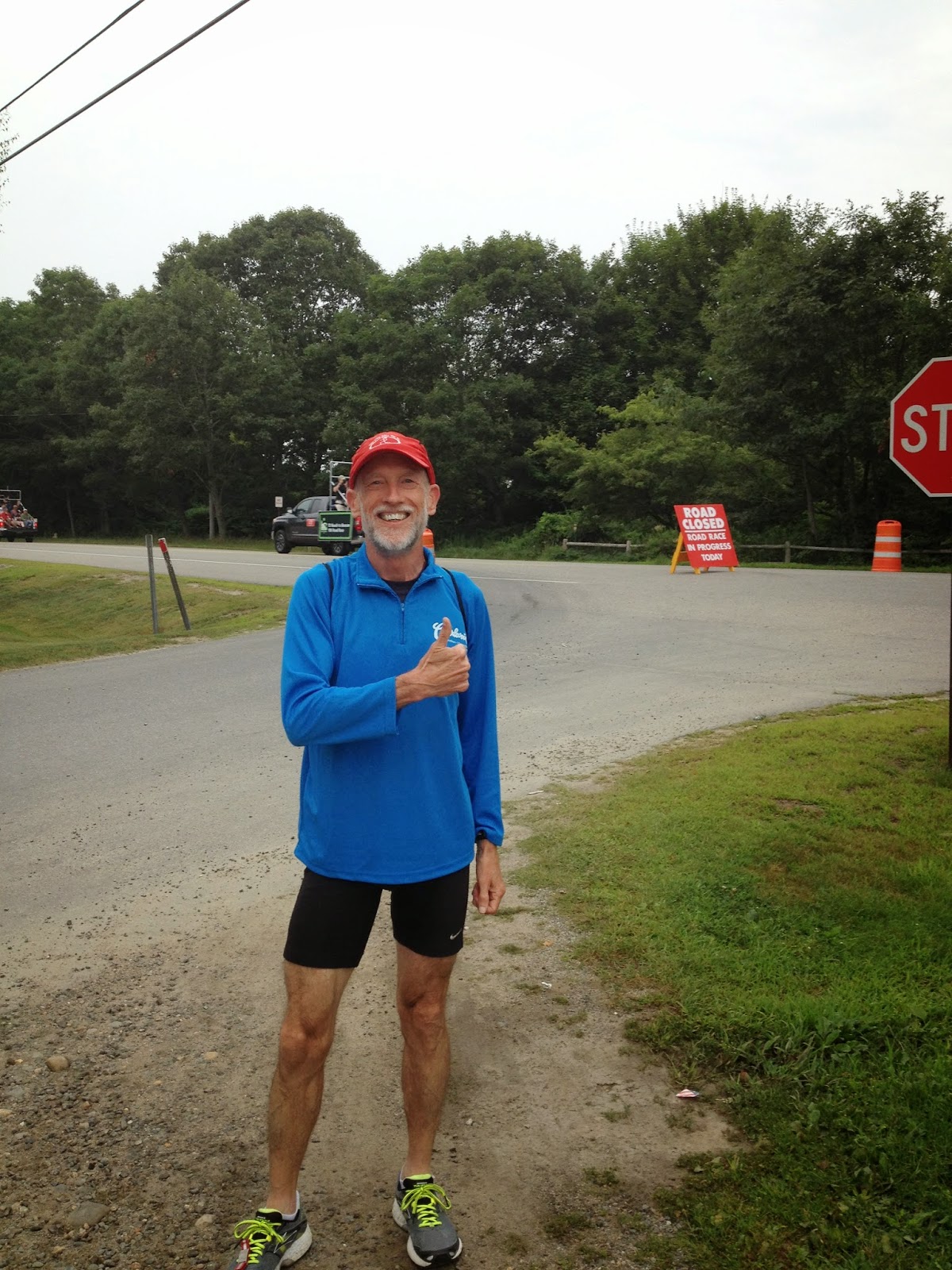 Because it's in a small town area with one major north south road, closures make for limited access to the starting line. My wife, Jackie, dropped me off at an ice cream shop about a mile from the start and I walked into the starting area. Here's the pic she took after dropping me off-you can see the road closure sign in the background--thumbs up for a good race!


When the race director heard I was going to be in the area for my daughter's wedding and would like to get into the race, he offered me an elite invitation. This was neat for two reasons--the first was that I had no hope of getting into the race otherwise. It fills up within  a few minutes on the day when registration is opened to the public, and second I got access to the elite athlete's tent at the start and finish with the likes of Meb Keflezighi and Shalane Flanagan. Here's a couple of views from the tent. 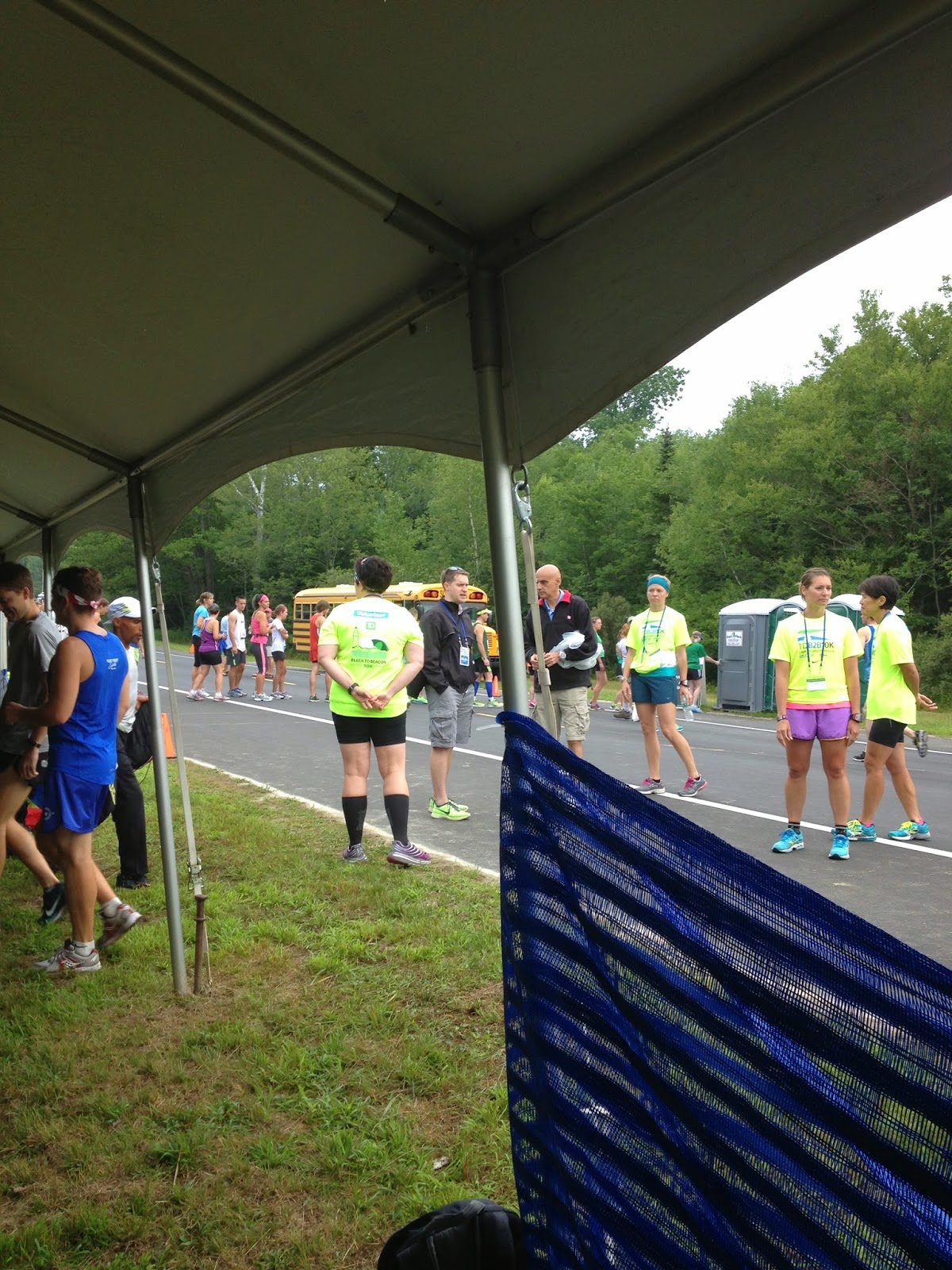 The first (to the left) shows some of the race volunteers and the second (below right) looking from the tent up along the start of the race course captures a view of Ben True (purple top) and Jordan Hasay (in black) during their pre-race routine. Both ran great by the way. True made the podium with an awesome time and Hasay, a star on the track but a newcomer to the roads, was very happy with her 4th place finish among the women. Flanagan had another incredible duel, this time not with an African runner, but with Gemma Steel from Britain who nipped her at the tape.

I ran pretty well although not as well as had hoped when I first learned about the race and how fast it was supposed to be. I have the excuse of a minor nagging injury...although having the excuse may affect how hard one runs--tricky bit that. In any case I was happier when, after the race, I learned that only Kevin Castille, who smoked the master's (age 40 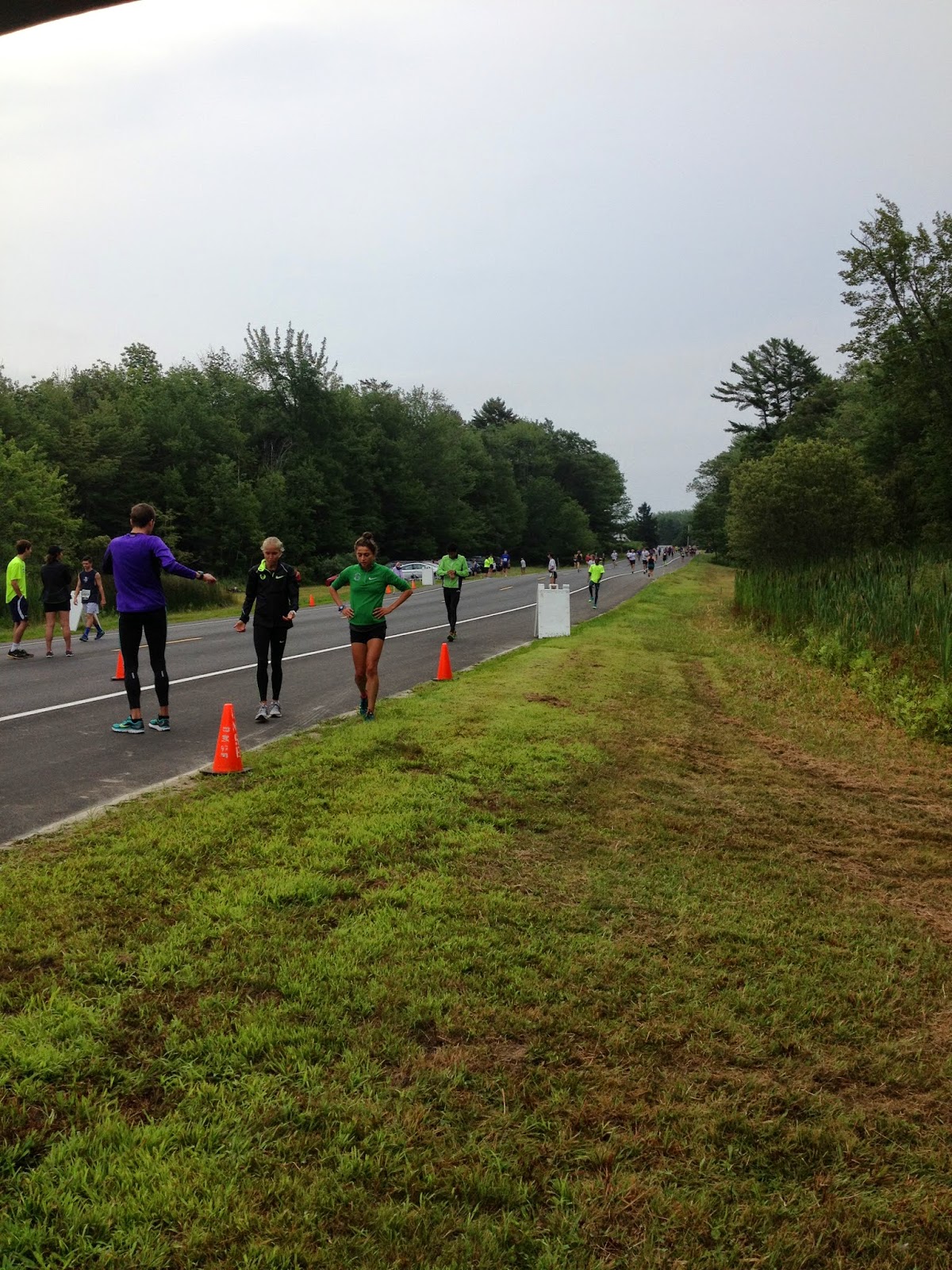 and up) field, had a faster age-graded time among masters men. (Age-grading is essentially a formula that adjusts race times by age to see how relative performance across age groups compares.) And as usual in the race itself I was battling plenty of younger folks, occasionally running next to teenagers and wound up sprinting for the finish all out against a 52 year old guy. Wound up with a 40:39 at the finish or about 6:36 per mile--not my fastest but decent enough time for a 68 year old, I guess. And got the 65-69 age group win! The crowds were amazing-a wonderful atmosphere. Our stay was made even nicer by lucking into a room at the home of Dudley and Mary Bostwick, long-time  residents of the area. Dudley, who is 85, is a famous landscape painter and they made us feel so at home. It was a delight to stay with them.

That's my report from our Maine adventure. In upcoming blogs I'll recount some of my races from earlier this year, preview some upcoming ones, and report reactions to the running of others, from local college X-country to elite races and racers in the US and across the world. The first half of 2014 was awesome for me; I hope it was for you too.

Posted by The Running Professor at 3:08 PM