May 21, 2022. The Rochester Mile starts the final quarter mile with a sharp uphill, a left turn and then another kick up to the finish line. There are 8 full turns and 26' of elevation change; it is not a course designed for breaking records. The threat of thunderstorms moved away from the start time to later in the evening. A sultry summer evening saw the Masters Runners eager to get to the starting line and compete! Some not only competed, but ran so fast they broke records, despite the challenges!

The temperatures at race time were in the low 80s, too warm for longer races but not a major challenge for the 1 mile run. Four Masters athletes broke or established American Records, and two others just missed! Edna Hyer, the oldest competitor at 88, collected her second division win of the season and established a new 85-89 American Record at 12:05.

Lorraine Jasper, 60, sped to victory in 5:42, breaking the American 60-64 Mile Record in the process. She lowered a record set by Masters Legend, Kathy Martin, in 2013.

Michelle Rohl, 56, has been setting 55-59 records on the track over the last year, dominating her division on the Cross Country turf, and winning the 5 Km 55-59 Road Championship.  She added the Road Mile American Record to her collection with a sparkling 5:12, breaking Marisa Sutera Strange's record by 15 seconds.

Nolan Shaheed, the Masters Track and Field legend, stepped off the track and onto the roads, coming home with another American Record at age 72. His 5:38 broke the 70-74 Road Mile record, established by another legend, Doug Goodhue, by 5 seconds.

Note: These records will be listed as pending until the Rochester Mile course measurement can be verified by the USATF Road Racing Technical Council.

The course in Rochester is technical, with 9 turns; the final quarter mile begins with a short, sharp uphill and finishes with a gradual climb to the middle of the Broad Street Bridge over the Genesee River.

WOMEN Jennifer Bigham took off from the gun, gaining 5 meters on the field in the first 200 meters. Michelle Rohl was in hot pursuit, with Amy Armstrong and Abby Dean right on her heels. Bigham had won the Masters Half Marathon overall championships in Syracuse in March; she was now showing that she had the wheels for a fast mile. But would she fade toward the end or would someone have a killer kick to catch her? The answer comes quickly in a road mile. By the time they were off the Court Street Bridge and approaching the half mile mark, Bigham had 20 meters on the field.

Bigham still had her lead when she hit the sharp uphill on Irving Place. No one was going to catch her now! Rohl and Armstrong were pushing with all their might, but could not narrow the gap. Bigham took the win in 5:06!

Armstrong pulled almost even with Rohl, but Rohl had a single second edge, taking the Silver Medal at 5:12!

Sixty meters back, Sara Girotto and Melissa Johnson-White had passed Dean and were battling for the 4th spot. Girotto won the battle in 5:27, with Johnson-White a second back and Dean following in 6th.

Bigham had run a 2:48 Marathon two weeks before and was uncertain as to whether she had fully recovered. She had been hoping she could follow someone else around the course but once she found herself in the lead, she embraced it! Bigham now has the Overall Championship for the shortest race on the Masters Circuit this year and the longest race, the Half Marathon! She will test her speed again  at the Fleet Feet Liberty Mile in her adopted hometown of Pittsburgh PA in July.

This was Rohl's 2nd podium finish overall on the Masters circuit this year. She took 4th at the 5 Km Cross Country Championships in Boston in October and followed that with a 3rd place finish on the roads of Atlanta. Impressive for a 56-year-old!

MEN In the Men’s race, Kevin Shirk, like Bigham, went to the front, but never fully separated from the lead pack. Jaret Herter, Jacques Sallberg, and defending Champion, Chuck Schneekloth, were all around him for the first half of the race.

Occasionally Shirk would throw in a surge to create separation if he felt someone was closing in on him.

Everyone hung tough, but by the time they had surmounted the rise on Irving Place, Shirk had 5-10 meters on  Sallberg, with Herter another 5-10 meters back. Not his best day, Schneekloth was a bit further back in 4th. Sallberg still had time to catch Shirk, but Shirk was having nothing of it. Both were leaping up the hill in full sprint. Soon Shirk was over the finish line in 4:31, with Sallberg 2nd in 4:33 and Herter next at 4:35. Schneekloth finished just off the podium in 4:41, with Scott Weeks and Mark Walchinsky emerging from the Chase pack to take 5th and 6th in 4:45 and 4:47 respectively.

Shirk had the fastest time coming in, a 4:29.7 at Masters Indoor Nationals in March. He then took 5-6 weeks off, ran a fast 5K on a flat course in 15:18 and then a week later a more strategic 10K. That set him  up for a fast mile! This is his first road victory at a Masters National Championship. He will step to the line in a few days to try for a repeat Masters win at the Loudoun Street Mile in his home state of Virginia. Sallberg ran 4:40.08 in March at the Newport-Mesa Spirit Mile, but then clocked 4:12.61 in a 1500 meter race on the track at the end of April. The standard Mile Split calculator equates that to a 4:32.82 Mile, not far off from Shirk's indoor mark. They had a very competitive race!

A week before this event,  Schneekloth had a 4:13.71 1500 meter effort, convertible to a 4:34, but Saturday was an off day. Schneekloth is training for the World Masters Athletics Championships in Finland in July. Running for Team USA, Schneekloth will look for his best day this season on the track! Herter had an excellent day, arguably running one of his best races this year.

The Overall Age Grading Championships honor the runners, over all age divisions, with the fastest time for their age relative to a world's best performance, with 90% and above considered World Class. The Age Grade score is calculated on the net/chip time, not gun time.

He was followed by two Masters track legends who crossed over to the road and took home some hardware.  Nolan Shaheed 72 got the American 70-74 Record, but Gary Patton 76 outpointed him for the Age Grading Silver Medal, 93.37 to 93.03. Rick Lee 60, the talented distance runner who takes on everything from the Mile to an Ultra Marathon across the desert in Morocco, claimed 4th. His 5:04 graded at 92.72. Sallberg, who finished 2nd overall, captured 5th place as his 4:32 net time earned 92.52, world class by a long shot! 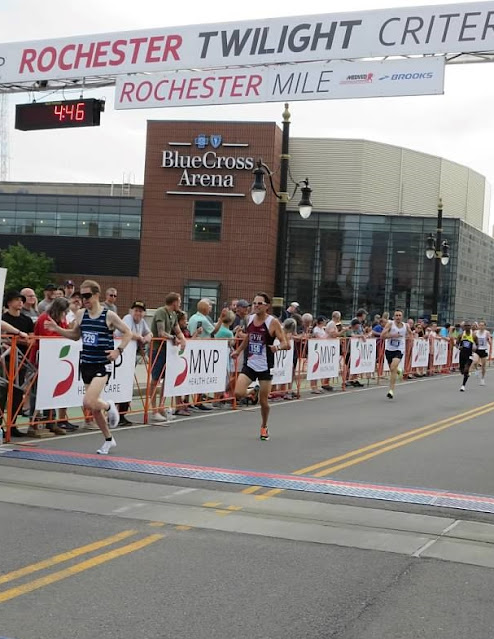 Posted by The Running Professor at 10:31 AM No comments: