March 6, 2020. It is the evening before the gun for the Gate River Run goes off. Gate has been the USATF Open 15K Championship for more years than I can remember. Its most infamous characteristic is the Hart Bridge, which looms over the runners as they approach mile 8. The ascent is a half mile long, cresting at 8.3 miles. From the apex of the bridge it is a downhill 3/4ths of a mile with a flat last quarter mile to the finish. There have been some great duels that played ut there. A few years back, Ben True won such a duel where both he and the 2nd place finisher ran a sub-4:00 mile. The first year I ran it in 2015, I was in the midst of a hamstring rehab and could only manage a 1:10:40 at the age of 69. That might seem pretty fast except that a year and a half earlier, when 68, I had run a 1:01:35. That year Skechers had a promotion because Meb Keflezighi was running the race; they gave a free pair of Skechers to the person in each age/gender division who had the fastest last mile. I was nowhere near fast enough that year. I was hoping for better luck in 2016 as I had essentially recovered from the right hamstring injury although I had not had time to fully regain fitness. I fared much better as a 70-74 year old. I finished 2nd, just 34 seconds behind Robert Hendrick, who competed on the USATF Masters Grand Prix circuit a couple of years later. We became good friends as well as rivals. My time was 1:08:34 but I had the fastest last mile in 6:44, 13 seconds faster than Hendrick. Meb did not run Gate River that year, so no free pair of shoes for me [darn!]. But the other thing I got was the single age record for 70-year olds. Heading into 2020, that record still holds. I did not run Gate in 2017, 2018, nor 2019 as the USATF Masters 8K Championship was in mid-March, typically one week after Gate; I did not feel it would be fair to my teammates to run a 15K that close to the 8K. When the Shamrock Marathon/Towne Bank 8K in Virginia Beach decided to stop hosting the Championship after their 3-years, I began to look at Gate River again. And, with many thanks to Race Director, Doug Alred, for responding favorably to my request, here I am. As usual, I drove from Indy to South Georgia on Thursday and drove the last couple of hours to Jacksonville on Friday. The first order of business was to pick up my bib at the Jacksonville Fairgrounds, where the Expo is held. 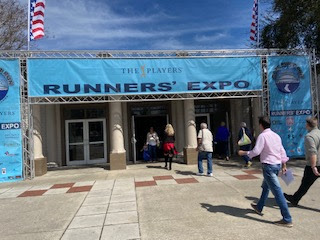 I took the opportunity to examine a couple of helpful signs to remind me where I should go in the morning. They are using a new starting line in 2020, on Duval Street west of the TIAA Bank Field, home of the Jacksonville Jaguars, and adjacent to the Fairgrounds. In 2015 and 2016, they started on Gator Bowl Blvd. 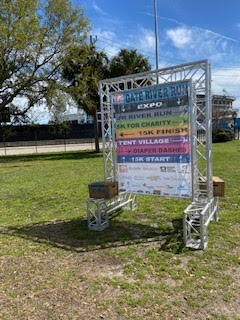 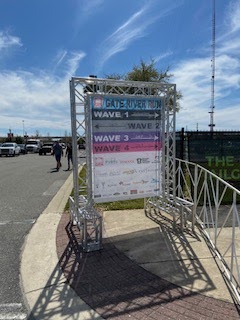 And here's the bib: 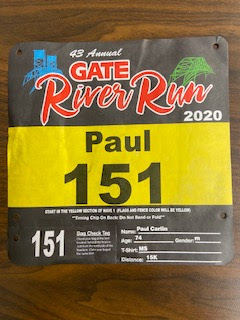 Who else is here? Most of the top road runners who did not run the Olympic Marathon Trials are here for the Open 15K National Championship. Some of the names I recognize on the Women's side are: Kim Conley,  Marielle Hall, Gwen Jorgensen, Cally McCumber, and Paige Stoner, who, according to her usatf.tv interviewer, is a steeplechaser who  finished 2nd at the USATF Cross Country Championships in San Diego. The main name I recognize on the Men's side is Futsum Zienesellassie, who was also the subject of a pre-race interview. Of course, I have known that name since he emerged on the high school scene in Indianapolis as a freshman at Indianapolis North Central, the HS that both of my kids graduated from just a few years prior. He was all-everything in Indiana and finished 2nd that year at the Footlocker XC Championships, I believe. As a college athlete, he ran for Northern Arizona and now trains with the Naz Elite group. He is focused on the track for this season; that is why he skipped the Marathon trials. He is going for the win tomorrow to go with his 46:55 USATF 10 Mile Championship win last year in the Twin Cities.

What about Masters athletes? I just happened to learn a few days ago that Alice Kassens, who finished 3rd overall at last year's USATF Masters 15K Championship in Tulsa, is entered. She is, no doubt, hoping to go home with some Masters prize money jingling in her pocket. If she can crack the top 10 overall, a very tall order, she could go home with some Open cash as well.

What about my age division, 70-74? Even though this is my last year in that division, I should do well. My training has gone well and I ran very well a month ago in the Pensacola Double Bridge Run, also a 15K. I won my age division in 1:11:16. 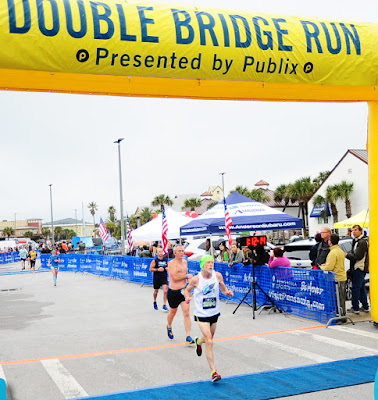 Training has continued to go well in the interim so I am hoping to improve slightly on that effort despite the higher bridge in Jacksonville.The only other folks I know about are the two top runners from last year, who are returning. One was 69 years old so this will be his first year in 70-74. But unless he is coming back from injury or cannot run for some reason, Page Ramezani is likely out of reach for me. He won the 65-69 division last year in 1:05:24. The other challenger who returns is Robert McConnell, who set the 71 year old record of 1:07:43 in 2018. Last year he won a close race in 1:09:59. If he runs a similar time this year, I should be competitive.

What are my goals for the race? First, as always, to run hard and well, finish the race, and emerge without injury. Second, I would like to improve on my Double Bridge time, so run faster than 1:11:16. If I break 1:11:00, then my age grading score would be above 82, another step on the way back up to 85%. It would be really nice to beat my Gate River Run time from 2015, 1:10:34; that should be within my reach. If I could break 1:10, that would be a dream. I would also like to finish on the 70-74 podium. Apart from Ramezani and McConnell, no other runners in the last two years in the age division have run as fast I am capable of running. Of course it is possible there will be someone new. If not, all I have to do is to deliver on potential. Easier said than done, of course, but that's what goals are for. It would be nice if I could go for the single age record for 74-year olds. That would take a major improvement though. My pal, Hendrick, holds that one, 1:07:17. If I can stay healthy over the next year, I can go for his single age record for 75 next year. All I would need to do is run 1:09:45. He sets the bar high!

Posted by The Running Professor at 10:23 PM