June 04 2015. Review of SLS3 Compression Socks. First the disclaimer—SLS3 offered to send me a complimentary pair of their compression socks for me to try if I would write a review but with no conditions on the nature of the review and certainly not on whether it would be positive or negative. They have offered a 40% discount and a raffle for a free giveaway of the socks. For those contacts, please scroll to the bottom of the review.

I had been curious about compression socks for three reasons. Like most other Marathon fans, I am well aware that Meb Keflezighi wears them in all his races. That is enough to get any distance runner’s attention. Second, when I was watching usatf.tv coverage of the Gate River (15K) Run a couple of months ago, I was struck by the commentators noting that a number of runners were sporting compression socks. Third, one of my Masters running compatriots had started wearing them recently, although in his case it was strictly due to a doctor’s prescription to prevent the development of blood clots in the lower leg and foot, a problem that had caused him some pain in the recent past. So this offer came at a good time for me.

First I will review what I learned on the web about compression socks before agreeing to give them a try and then a bit about my experience. For those who already know all they want to know about the scientific evaluation of compression socks, please jump down to ‘My Experience.’

What I Learned. Compression socks are long stockings (knee-high typically) that are designed to have tighter pressure at the ankle and lighter pressure as they rise up toward the knee. This graduated pressure characteristic is crucial. They are widely used by people who need to be on their feet a lot with their work and/or who have poor circulation in their lower limbs. They are specifically also used to prevent swelling and to prevent the development of blood clots. More recently they have become popular with distance runners, either as socks or as sleeves.

What about their worth to distance runners? That is debatable. Here are just a few of the articles that have appeared presenting or summarizing research on the benefits, if any, from distance runners wearing compression socks.:

My general view of the evidence is that there was little gain during training but some evidence of better recovery after training. A potential mechanism for increased performance would be enhanced flow of oxygen to the working muscles.  Studies have found decreased muscle soreness and general fatigue, especially after long or hard runs, but it is unclear whether this is real or a placebo effect.

Immediate background/context. I am a 69 year old elite Masters runner. In the first 7 months of 2014, before succumbing to a hamstring injury, I ran a sub 40 minute 10K, a 1:29:29 Half Marathon, and a 1:46:27 25 K. The hamstring injury was a major trauma which I, unfortunately, aggravated in the final 150 yards of a 5K national championship cross country race in November. After that it was two steps forward and one step backward most of the time with an occasional two or three steps backward. I restrained the hamstring two weeks before running the Boston Marathon in a very slow time (an hour slower than my qualifying time). Luckily I did not aggravate the injury during the Marathon itself so a week later started running again and vowing to be fully compliant with Physical Therapy –type exercises at the Gym. That is the immediate context for my tryout of the Compression Socks—in rehab mode.

My first try was to wear them overnight after a workout; this was one of the ways some advocates suggested. It turned out to be very difficult for me to get the socks on, although I did eventually succeed, and then I had a hard time getting comfortable with them on. In fact, after tossing and turning for an hour or two in bed, I eventually woke up and removed them. So even though some recommend wearing them for 24 hours after a training run, that did not work well for me.

On Getting into Compression Socks. When I first tried getting them on I hadn’t done my research so it was really hard. Here are the tips I found later online to make it easier to get compression socks on. Try putting baby powder (foot powder) on the foot first so they slide more easily and there is also a method involving folding the socks in half by placing your hand in through the sock, grabbing the heel and pulling that up through so it just sticks out. Then stick your foot in the bottom half and then grab the ends and sliding up over your heel…and then finally up over your calves. Doing both the powder and the special fold job is probably better. I struggled mightily before encountering those tips; it was much easier after, but still not easy. I certainly cannot get them on (or off) as quickly as the guy in the video but maybe you’ll have better luck.

For a video exposition of the method explained above, please see:
https://www.youtube.com/watch?v=wdgT6-bc9Zk

My second try was to wear them during a run. Here’s a pic before I set out on the run. 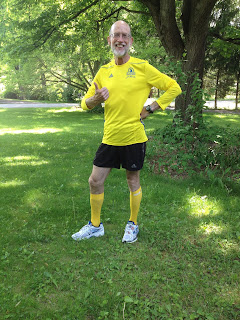 How’s that for color coordination with my spiffy new Boston Marathon shirt? :)

It was hard to observe any effects during this or one other workout I tried them in. The workout on this day, May 2nd, was hard but not super hard—4.5 miles with an easy first mile plus and then two quarter miles at 10K pace, interspersed by a quarter mile jog, with the 2nd quarter followed by a half mile jog and then run the last mile at 10K pace.. The only effect I may have noticed is that I seemed to warm up a bit quicker. I am pretty consistent now about starting off at a slow jog and gradually increasing pace if I feel like it, and then after the first three-quarters of a mile or so, stop and do stretching of various kinds. I felt that I ran that first bit faster with the socks on. I also ran the two quarter miles faster than anticipated, but that was more than offset by having to run the last mile at slower pace than anticipated and feeling the hurt a bit more than I had hoped. I am afraid I have to put myself in the group that finds little positive training effect of the socks during the run.

My final attempt with the socks was to put them on after the run and wear them for 2-3 hours. Over the next three weeks I had a number of hard workouts as my fitness was starting to return. By the end of the 2nd week of May I was running workouts like 6.5 miles in all, including 2 quarter miles followed by two half miles followed by two quarter miles, all with 2-3 minute active recovery between and for the first time in months the quarters were sub-90 seconds and the half miles were sub 3:15 and one sub 3:10—real progress. After the hard workout detailed above, I switched into the compression socks and wore them for a few hours. Over the next two weeks I had several hard workouts and I alternated wearing the socks afterwards and not wearing them. When I wore them, they did feel nice and snug, and I felt good about wearing them. At first I thought they might have been reducing soreness and improving the next day’s workout but after three trials both ways I could not really detect much difference in recovery.

My wife says to report that I do have good circulation in my legs though and that may mean they don’t benefit me very much where they might benefit others. It is also true that I am quite light, as befits a long distance runner—only 130 lbs. these days, on a 5’8”-5’9” frame. Maybe they are more useful for the typical recreational runner? So my lack of effect should not be taken as definitive for others.

One of the supposed benefits is in wearing the socks on long drives and in waiting around the day before a race. I will definitely give that a try next time I drive 3 hours or more to a race and/or have to wait around a motel room for a day or two before the race. When I do, I will update this review.

SLS3. What about SLS3 in particular? I can say they were very pleasant and easy to deal with via e-mail. It was very easy to get the right size from them with just a couple of useful and easy to take measurements.

Offers. If you feel you want to try them yourself, SLS3 has offered a free give away. Please visit and enter the raffle at

They have also offered a 40% personalized discount to readers of this blog. Just visit their website at:

and provide them with the RP40 code.
Posted by The Running Professor at 4:32 PM