May 1 2020. The last major road race was the Gate River Run, held on March 7th. There have been no USATF Masters Championships since the USATF XC Championships in San Diego on January 18th. There is no indication yet about the remaining 3 USATF Masters Championships in the fall, but they are looking increasingly at risk. The New York Road Runners cancelled the US NYC HM and that started the dominoes falling--Cherry Blossom 10 Miler, Boston Marathon [postponed to October], Broad Street 10 Mile Run, and Grandma's Marathon were just a few of the early casualties.Two of the summer races, the AJC Peachtree Road Race and the TD Beach to Beacon 10K, were taking a 'wait and see' approach but capitulated this week, with B2B cancelling for 2020 and AJC Peachtree moving from Independence Day to Thanksgiving! According to Road Race Management, "The Professional Road Running Organization (PRRO) has shifted the dates of the 2020 PRRO circuit into 2021." What's a Masters Elite Runner to do? Train, train, train! But that's tough with no race outlets in sight.

A little trash talk over social media and Strava led the brilliant minds of the Garden State Track Club [GSTC] and the Atlanta Track Club [ATC] to devise a virtual competition. The original idea related back to 2019 when the GSTC had to win a showdown with the ATC at Tulsa to take the 2019 Masters Grand Prix Men's 40+ title. At virtually [ho, ho, ho] the same time, the ATC Men's 60+ team and the Greater Lowell Road Runners [GLRR] M60+ teams were also talking trash and talking competition!


GSTC got on the board first in that they had a virtual intramural competition involving just their own teams. That was, apparently, great for team camaraderie, and gave them a little experience with the 'time trial' format. Of course, the times do not carry over. See below the Intramural contest for the rules and rosters for the upcoming dual meets.

It started off with a birthday challenge from Mark Zamek:

"Every year on my birthday (April 14), I try to find a 5k race to kick off the racing season. ...This year there are no races being held so I’m holding my own “Social Distancing 5k”.  I’ll be running on the track solo as my first “race” of the year. Would anyone like to join me in the “race?" I will be giving out age group and age graded awards (i.e. club kudos) to all participants.  Just send your Garmin data to me next week along with any comments and we will collect the times and send out to the group. I’ve copied some of the 40’s youngsters on this as well; they just might be crazy enough to jump in on this challenge."

They had 19 competitors, all from the Men's teams; here's how it came out:

Next up are the friendly competitions between GSTC and ATC, a number of divisions, and an M60+ competition between ATC and GLRR. Just for fun, I will see how the GLRR times in that competition would fare if they were thrown into the M60's division of the GSTC vs. ATC contest.

First the competition structure:
==================================
The goal is to have fun and keep everyone motivated. A little trash talk doesn’t hurt either!
ATC suggested starting with the 5k since it appeals to the widest group of runners. All competitors should run their 5K between May 2nd and May 10th. 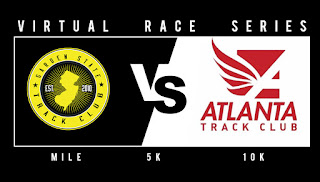 I have been informed that both Williams and E. Frieder are covid-19 positive but are recovering. I take the 'OUT' to mean that E. Frieder will not recover in time to run in the 5K, but watch out for him later in this series. I am guessing that the 'NT' for Williams reflects that his state of recovery by March 10th is uncertain, but he expects to join in the race. Presumably he will run late in the challenge to be as recovered as possible. Unless GSTC provides an age for Wise, he cannot be included in the Age Grade competition. He is, apparently, not in the USATF membership data base.

No ages were provided for the ATC 40+ runners on the rosters I was given. The ages entered above are from my research and are subject to human error.

The agreement between ATC and GLRR was to score the first three or, if it is desirable to have more direct contributions, the first four, both by place and by age-grading.

I am not going to do my usual preview where I pick winners and so on. The essence of this is a team competition. The overall competition between GSTC and ATC looks tight. It is harder to tell which way it might go with the inclusive rules they have as strong runners up front may easily be outweighed by slower runners in the 9th through 13th position, for example. (Almost) everyone counts, which is great! And it is all for fun, anyway, and to get a little more fodder for trash talking!

I also need to get this posted while it is still a preview and not a post-view! Best of luck to all of the runners, especially those who have not yet run their virtual 5K!

Kudos to ATC, GLRR, and GSTC for organizing the competition--Best of luck to all and whichever team wins can claim to be 'THE BEST' at least until the next time!

And who knows, going forward? Maybe some of our other teams will want to join in the fun!

[Tune in next week for the recap!]

Posted by The Running Professor at 2:55 PM